Here’s June 2014’s  analysis of the pushes to our Mozilla development trees. You can load the data as an HTML page or as a json file

Trends
This was another record breaking month with a total of 12534 pushes.  As a note of interest, this is is over double the number of pushes we had in June 2013. So big kudos to everyone who helped us scale our infrastructure and tooling.  (Actually we had 6,433 pushes in April 2013 which would make this less than half because June 2013 was a bit of a dip.  But still impressive 🙂

General Remarks
The introduction of Gaia-try in April has been very popular and comprised around 30% of pushes in June compared to 29% last month.
The Try branch itself consisted of around 38% of pushes.
The three integration repositories (fx-team, mozilla-inbound and b2g-inbound) account around 21% of all the pushes, compared to 22% in the previous month.
Records
June 2014 was the month with most pushes (12534 pushes)June 2014 has the highest pushes/day average with 418 pushes/dayJune 2014 has the highest average of “pushes-per-hour” is 23.17 pushes/hourJune 4th, 2014 had the highest number of pushes in one day with 662 pushes 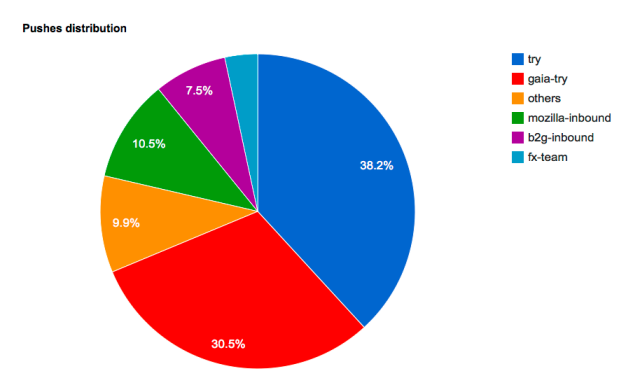