My presentations from EclipseCon Europe are now available on slideshare.

The first one is the story of the Eclipse and Equinox team’s migration from CVS to Git.

There were a lot of great presentations on  Git migrations such as those by Steffen Pingel and Christian Campo.  One thing that I’ve learned is that the time to migrate is proportional to the size of your code base and history.  Someone asked me if we considered just starting in Git without our history. Well, no, but that would have solved a lot of problems. It was also interesting to talk to the EGit team, and meet some of the people working at GitHub. (Thanks for the octocat stickers Kevin!). In honour of Movember, this slide seems appropriate.

The second talk I co-presented with John Kellerman. It’s a look back at the last ten years of Eclipse history. I had several people come up to me after the talk and say they really enjoyed it. Thanks! It was fun to look back at Eclipse history and dig up funny pictures and bugs. I enjoyed presenting with John because he talked about the business side and I talked about the evolution of the Eclipse community from a down in the trenches commmiter perspective. A good balance. He has been involved in the Eclipse community since well before my time, lots of great stories!

Has it really been 10 years?
View more presentations from Kim Moir

You can also listen to the talk on FOSSLC website.  I love the fact that all the EclipseCon presentations were recorded. I plan to go back to and watch the sessions I missed!

A big thank you to the organizers of EclipseCon Europe for a fantastic conference. I’ve never attended one before, and was very impressed. Beautiful location, interesting talks, great running paths nearby and of course, the best people. It’s great to be able to spend time with people who you work with but never get to see in person, like Ian Bull and Andrew Overholt. It was also great to meet new people at lunch and in the hallways.  I talked to some first time EclipseCon attendees who were very impressed with the caliber of talks at the conference so kudos to everyone who presented.

At the IBM booth, we pinned up many pictures of the Eclipse family over the past ten years. It was great to talk to people who visited the booth, especially those new the the Eclipse community.  I posted a link to them on my Google+ account. Looking back at them it’s amazing to see so many smiling people.

It’s hard to believe that it’s been ten years. I had a number of people come up to me at the conference and say that they couldn’t believe that I had been involved in the community for ten years. Well, I can’t believe it either. It reminded me of the moment when I stood up on stage to receive my university diploma and I thought, how could these four years have gone so quickly?  I don’t know but it’s been a lot of fun.  By the way, here is a list of other committers who have been involved with Eclipse for ten years or more. 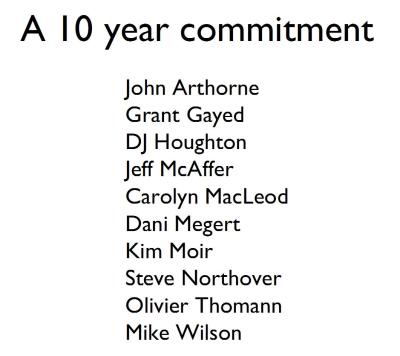 More importantly, there are now over a thousand Eclipse committers today.  I’m honoured to work with you all 🙂